5 common IT terms explained for a novice IT recruiter

Have you ever had a situation where, after reading the job description of an IT position, it is still not entirely clear to you, what the person you are looking for is actually going to do? The fact is, when you first enter the IT world as a novice recruiter of an IT recruitment agency or an in-house HR team, you will encounter an overwhelming amount of new terms, which do not necessarily speak for themselves. What is worse, the prevailing on the web, highly technical explanations also do not help you understand them... 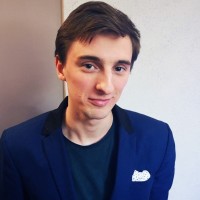 In this short article, I will introduce you to some common terms that often appear in IT recruitment, but are explained in the least technical language.

It is a person between a team of software developers (Dev) and operational teams (Ops) such as System Administrators and Testers. The task of such a person is to coordinate the process of creating and implementing the application in order to minimize the time between the completion of the code or its patches and their final implementation on servers (so-called “production”).

In the past, this process was coordinated directly by developers or administrators, but with the advent of new technologies such as the Cloud, the scope of responsibilities has increased and it has been separated.

This method of software development is most often used in companies, where changes in the production code are very frequent (even several to several times a day).

A very common customer requirement is that the sought developer should have experience in implementing an external API in applications. But what does the acronym API stand for?

API stands for Application Programming Interface. It is a set of rules for integrating its components with other applications. Code developers also create documentation that is later shared. Sometimes the code is fully public (so-called Open Source) and anyone can use it, but often the application code is protected and made available to other entities under contract.

An example of an API implementation is placing the option of instant payments in the customer’s store.

In simplest terms, Frontend is the part of the web application or mobile application that the user interacts with. All graphics, buttons, forms – what is visible – belongs to the frontend part. Frontend technologies include JavaScript, React, Angular, and Vue.

Backend, on the other hand, are mechanisms invisible to the user, i.e. the area where the entire application logic is located, where, among other things, Frontend connects to databases or configures protocols for transferring information between the user and the server. Backend technologies include, for example, Java, C #, PHP, Python

In most companies, programmers are divided into people dealing with either Frontend or Backend, while we also distinguish people whose skills allow them to deal with both areas – the so-called Full-Stack Developers. 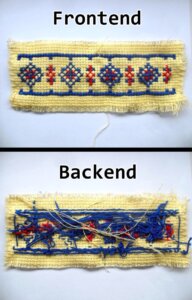 In short – Quality Assurance teams are people who test the code written by programmers in various ways. The frontend and backend layers are tested in both web and mobile applications.

Importantly, not all companies will find dedicated QA teams. This can be for many reasons (budget, project size, or chosen development methodology). Very often the responsibility for this falls on programmers, but from the conversations I have had with some, it is often not a welcome situation among them. 🙂 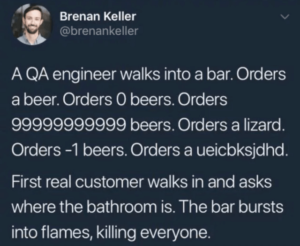 Now is the time for a mistake, that is so popular, that it has become an iconic object of Internet jokes. ?

A common misconception among non-IT people is that there is a relationship between Java and Javascript. They are indeed two programming languages with similar syntax used in web application development, but this is where the similarities end.

JavaScript is not the “script” version of Java. They are two programming languages developed independently of each other.

Where does the similarity in the name come from?

Java and JS were created in the nineties. Java was created by Sun Microsystems, which was later acquired by Oracle. JavaScript was developed by Netscape as an implementation of the ECMAScript language. The language’s first name was LiveScript, and in the wake of Java’s popularity in those years, Netscape agreed with Sun Microsystems to use the word Java in their language name. It was simply a marketing ploy to bring publicity to the emerging technology. The goal has been achieved – JavaScript has gained immense popularity (although I think more than the name, its modernity, and the ability to create something more than static websites), but also brought a confusion that continues to this day. 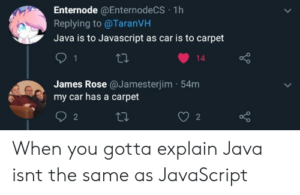 Hopefully, I have clarified some definitions that may be confusing for a beginning IT recruiter. Understanding the job description should be a little easier now! 🙂

I wonder if you encountered any other IT terms, the meaning of which is not entirely clear to you? ?  If so, please send them to me at p.kaminski@teamuprecruitment.com, and I will try to explain them in the next article.

A typical situation: Your candidate - Krzysiek - has already come quite far in the selection process. The head of the department liked him, he did well in the recruitment task, the team loved him. There is consent to employment. The salary offer is in the upper limit of expectations indicated by Krzysiek. The Product Owner is already rubbing his hands, thinking about the progress on the project which they will make with Krzysiek on board. There is one problem - the candidate does not jump for joy when you offer him a job. Is he balanced, too calm? He claims he needs time. After a week of silence, he sends a rather dry e-mail in which he thanks for the offer, BUT... 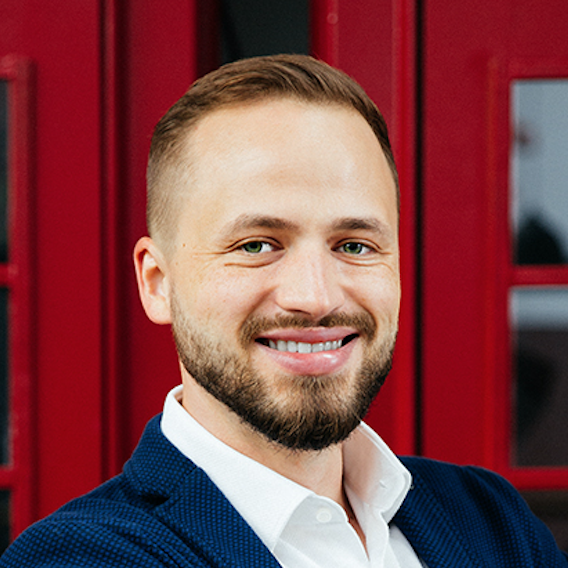 What does an IT recruiter do? Is this a job for you?

What does an IT recruiter really do? How much does he earn? How to become one? These are questions that are asked during meetings with us at career fairs or during recruitment interviews. In this post, I'll look at the profession of an IT recruiter and I will try to introduce it to people who are considering choosing this career path.

How can we help you?

Are you looking for an efficient IT recruitment agency in Poland or perhaps a new challenge in your recruitment career? Maybe you have just found a typo on our website and you can’t wait to point it out? Either way – let us know!